7 Accounts Based Marketing Examples to Inspire Your ABM Campaign

Accounts based marketing is a combination of science and art.

If you want to generate leads through ABM, you need a data-backed campaign that’s full of creative plays.

But generating great accounts based marketing campaign ideas can be so tough.

So our team thought we’d pull together our seven favorite accounts based marketing examples – some of our own, and some from others – to help spark the creativity you need to roll out your own ABM campaign.

Our 7 Favorite Accounts Based Marketing Examples

Our team here at Brew recently helped a B2B company in the energy space 5x their revenue over the course of two years – largely in part to a highly successful accounts based marketing campaign.

One of our client’s biggest struggles was landing large deals. They were relying heavily on traditional sales outreach methods, and finding no success. They desperately needed to land a few larger accounts to meet their revenue targets.

We knew that an accounts based marketing campaign could do the trick.

Here’s What We Did:

We interviewed our client’s clients to get a crystal clear understanding of their ideal customer profile, and created buyer personas to guide our account selection. 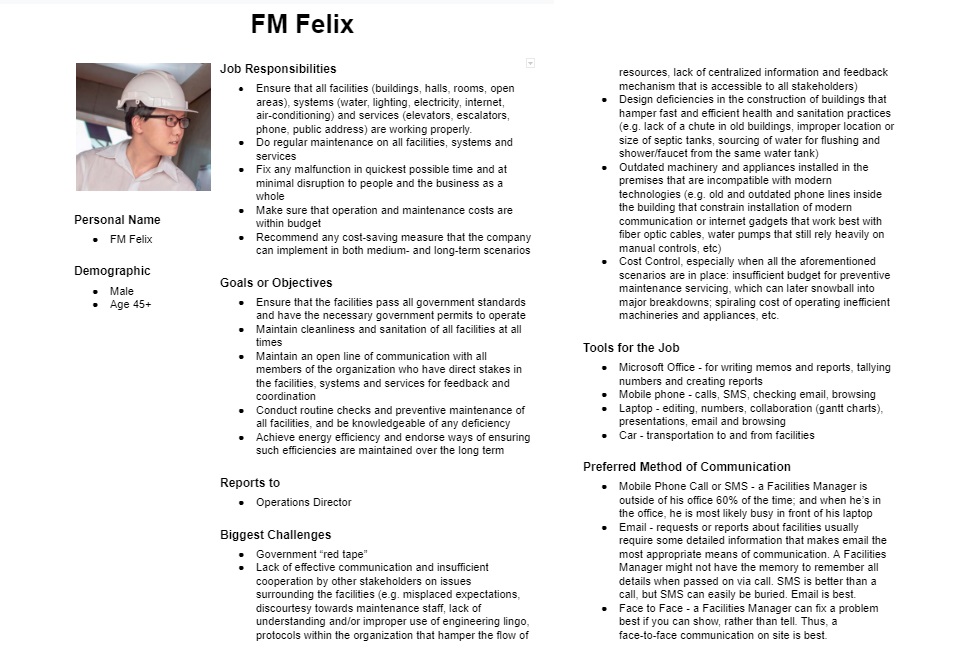 We leveraged third party tools to obtain a database of prospects with the decision maker’s job title in the region they serviced.

We set up a lead nurturing workflow in Pardot targeted at these prospects. The series focused primarily on cost as the pain point, where the CTA was to input more information in exchange for an ROI calculator. 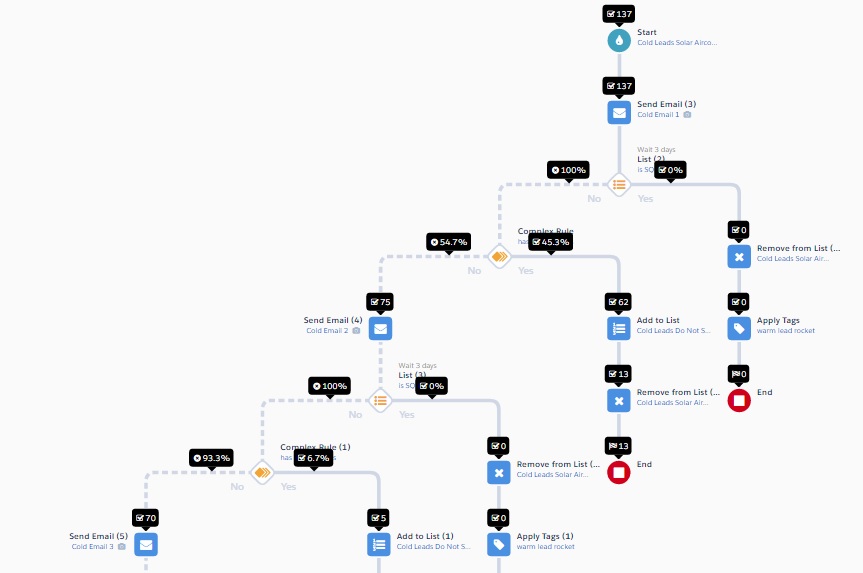 Why It Worked: The key to this accounts based marketing campaign was the specificity of our client’s ideal customer profile. We dedicated a lot of time and resources to understanding their buyer personas so that we made sure our marketing efforts were going to the right person with the right message.

Their marketing team wanted to target key accounts with highly personalised content that spoke to their industry-specific pain points.

Here’s What They Did:

Touch One was a personalised mailer of communication tips for the HR industry they were seeking to reach. 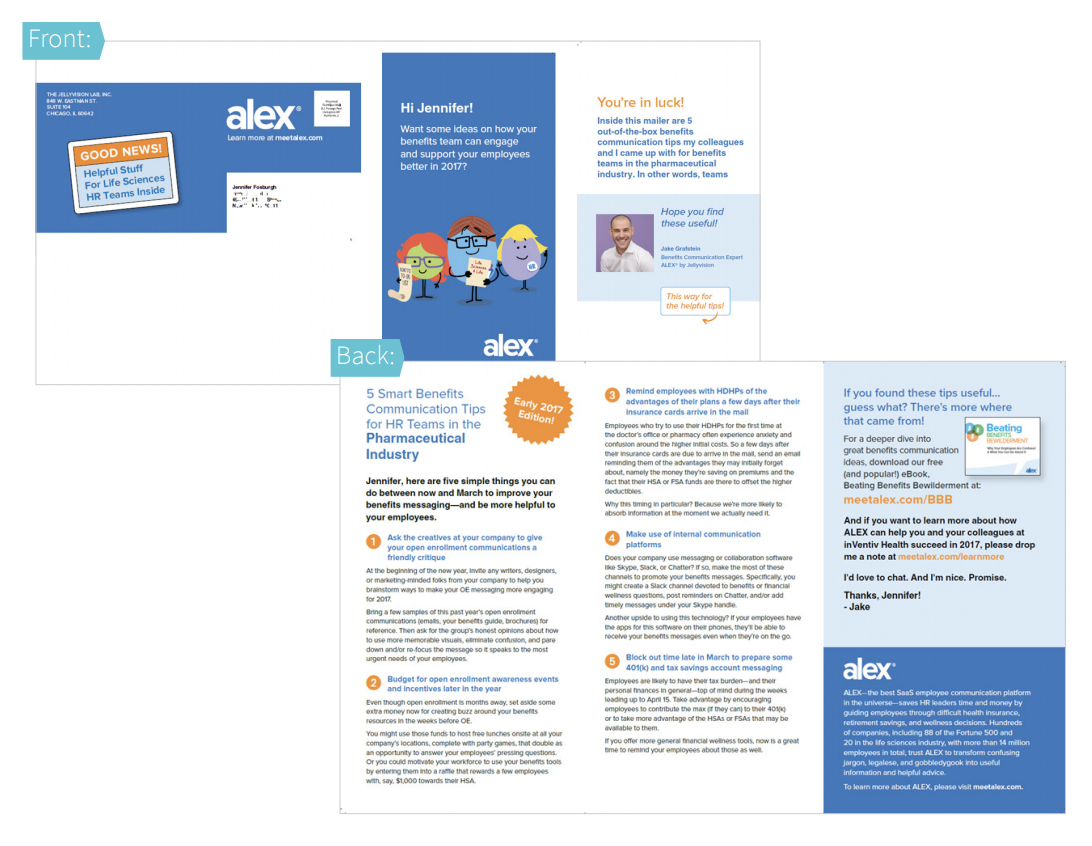 Touch Two was a really cool branded viewfinder along with a customized booklet regarding HSA and FSA savings – an incredibly relevant topic for HR directors. 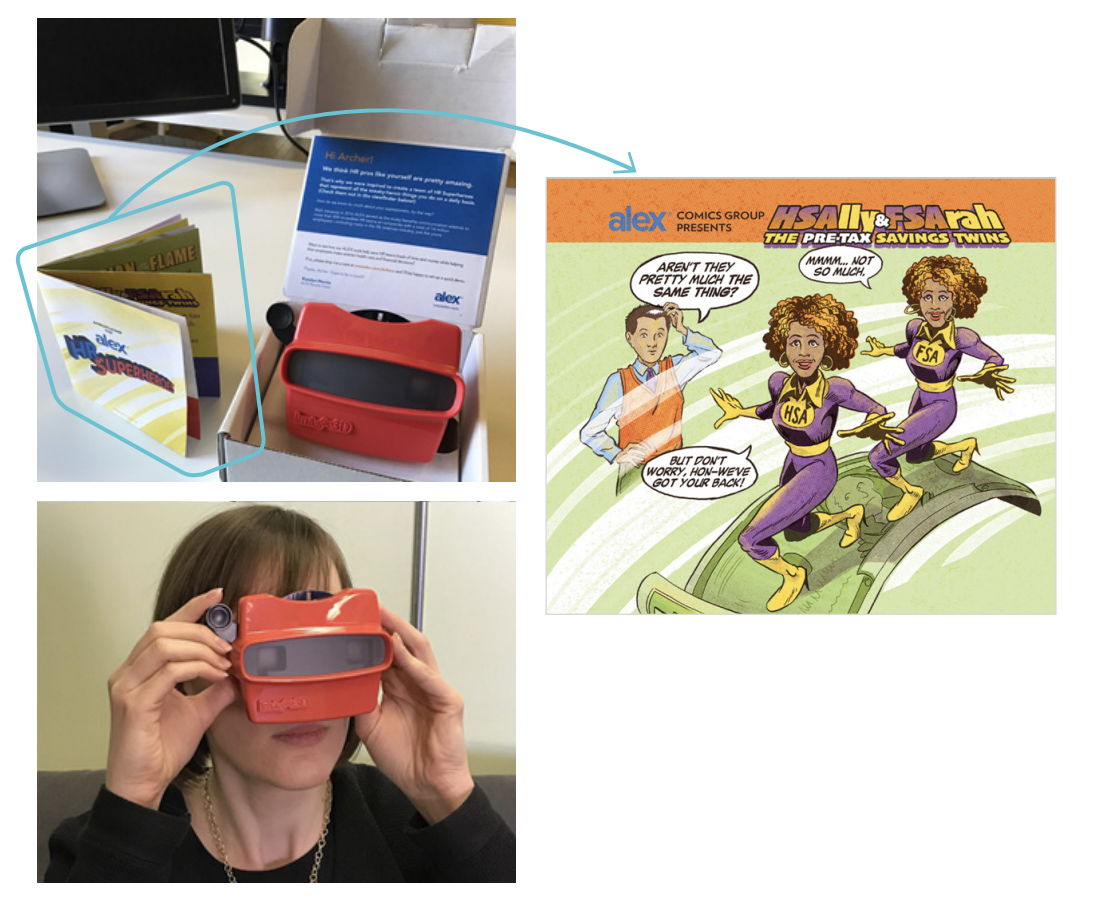 Touch Three was a neat little kit full of fun and useful goodies to help people be prepared for communication challenges. 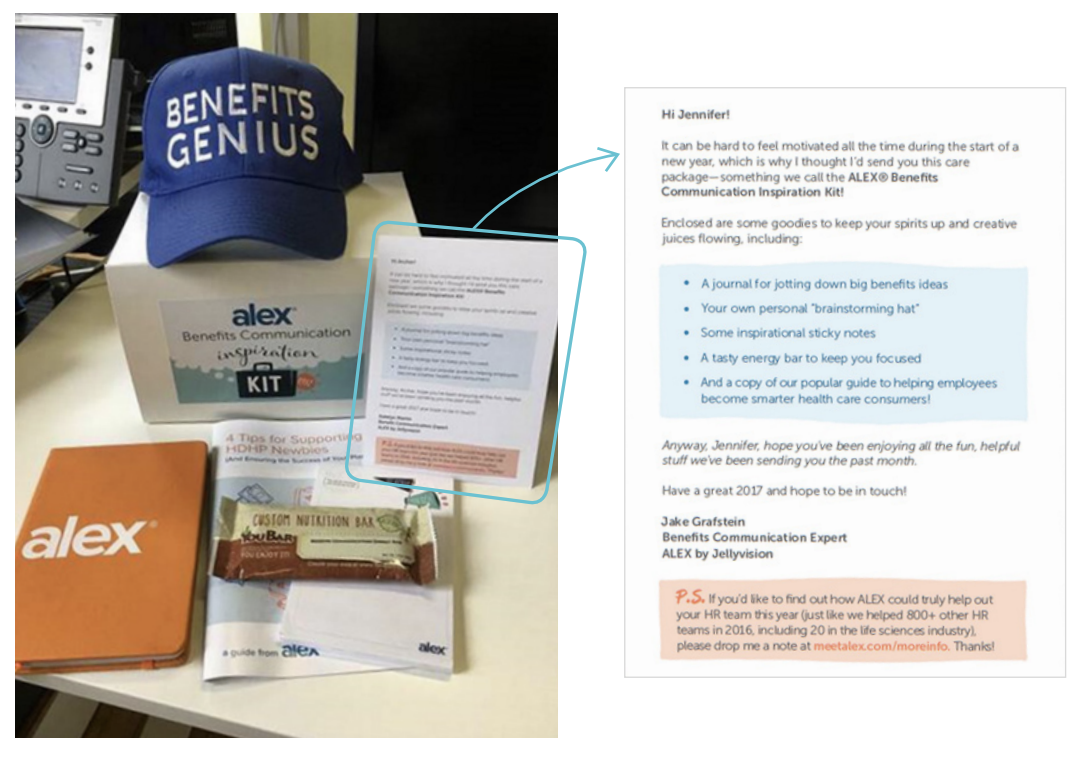 Why It Worked: Plenty of directors and decision makers receive direct mailer goodies on a regular basis. If you want to run a successful direct mail campaign, you’ve got to make sure your mail stands out. Jellyvision nailed it with their personalized and creative plays.

Engagio, a B2B marketing software company, was expanding their services and needed to start conversations with new accounts. Though they were a fairly well-known brand, they needed a creative campaign to get their foot in the door at some of their target companies.

They rolled out a creative campaign that led to a 31% meeting rate with their target accounts.

Here’s What They Did

Engagio recognized the key decision makers they needed to reach were Directors of Marketing. They also knew many of their ideal clients attended Dreamforce, Salesforce’s annual conference.

So they took a list of attending companies, identified their Directors of Marketing, and had lifelike bobbleheads made for each of their targets. They took pictures of these bobbleheads and emailed their targets letting them know they could pick theirs up at Engagio’s Dreamforce booth. 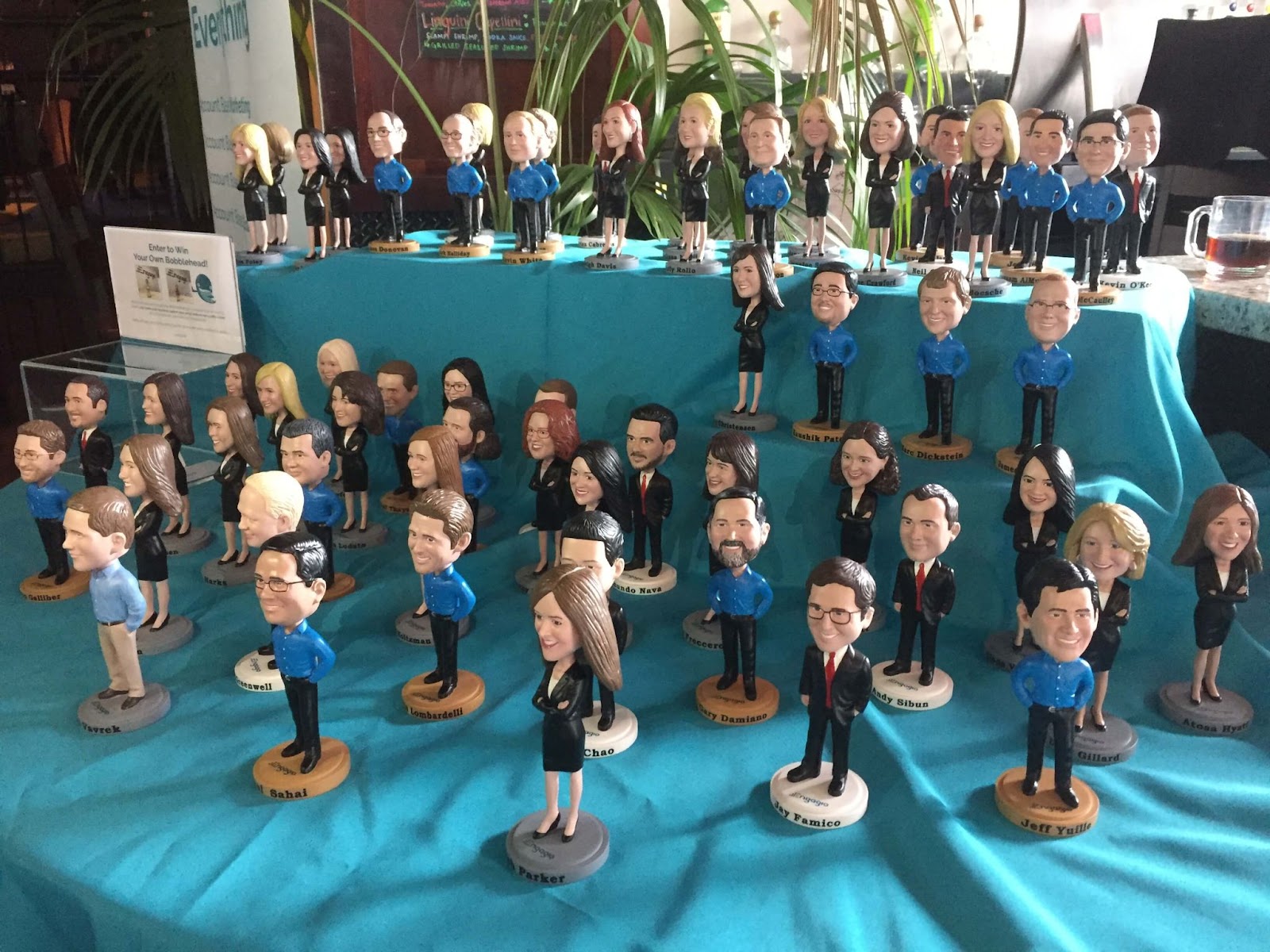 From there, they attempted to set up a meeting with the prospect. For those who didn’t make it to the booth, Engagio let prospects know they could pick up their bobblehead at a meeting with one of their sales reps.

Most of their target prospects picked up their bobbleheads, and 31% attended highly valuable sales meetings.

Why it Worked: I think it goes without saying that the key here was the item. A personalised bobblehead is a genius idea to get in front of target decision makers. After all, who wouldn’t want a free bobblehead of themselves?

4. 323% Increase in SQLs Thanks to Well-Designed ABM Funnel

Our team here at Brew recently approached us needing more – and cheaper – sales qualified leads. They had been relying on inbound efforts, but spending far too much money per lead. They needed a more targeted approach that drove qualified leads and saved them money.

We helped them roll out an ABM campaign that improved their monthly SQLs by 323% in just a few short months.

Here’s What We Did:

First, we worked with our client to hand-select 200 target companies we both knew would make ideal clients. Many ABM campaigns start off with buying a list or casting a wide net, but due to the length of their buying cycle and typical deal size, we took a more targeted and customized approach.

If you don’t have any idea how to go about selecting a list of target accounts, you can get help from B2B data solution companies.

We rolled out targeted LinkedIn ads to these accounts, prompting them to download an industry specific eBook full of valuable insights and information. 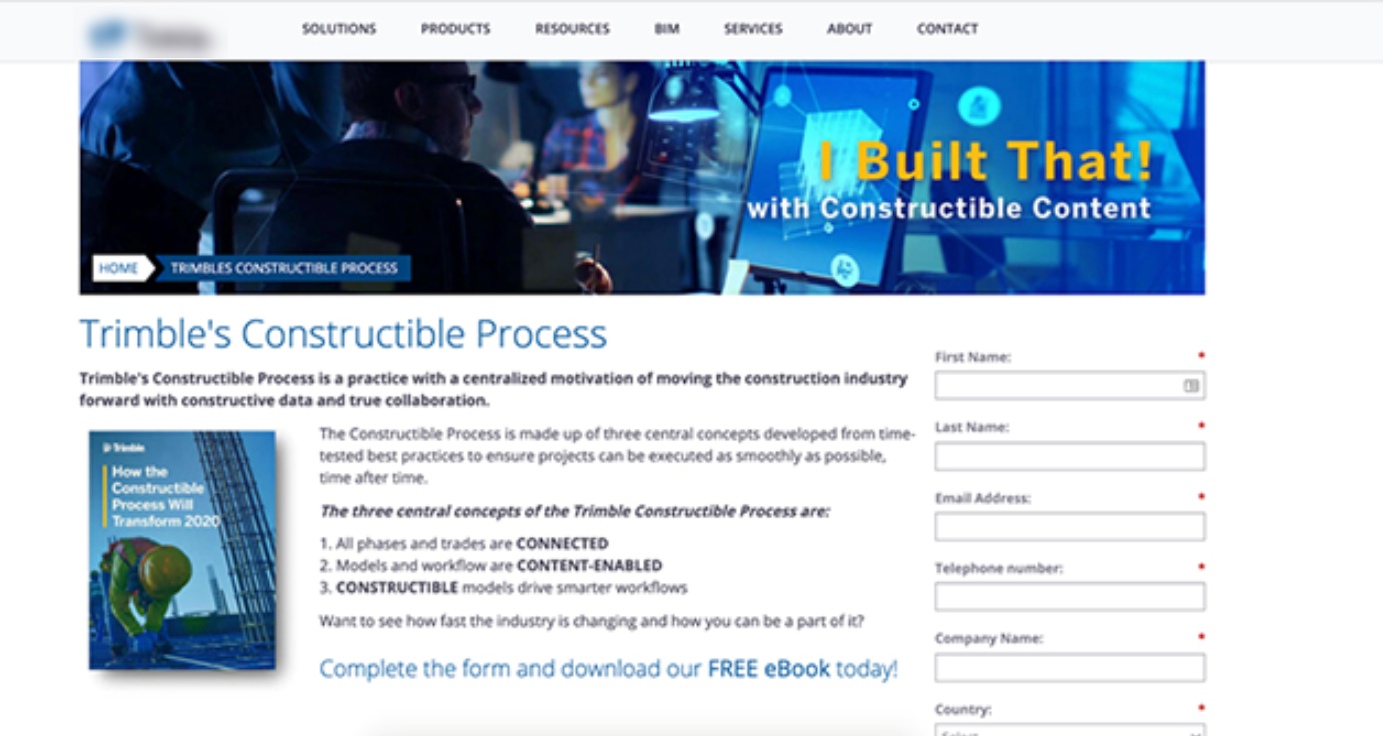 Anyone who downloaded the eBook was manually followed up with by a sales representative to move the conversation forward.

Additionally, we retargeted those who had viewed the page, but not downloaded to remind them of their free offer.

Why it Worked: There are two reasons this campaign saw success: the hand selection of target accounts and the insight of the eBook magnet. We heard from many of their leads that the eBook was exactly what they needed and full of valuable information.

Radius, a B2B data and predictive marketing company, was looking to hit their lofty revenue targets while also helping their customers better understand what Radius offered.

They rolled out an accounts based marketing campaign built around a custom report personalized at the account level. The campaign brought in seven high ticket opportunities within weeks.

Here’s How They Did It:

They started by selecting warm target accounts, focusing on those who were actively in-market for their products or already engaged with Radius. They only selected accounts with a high opportunity value / potential deal size to get the most out of the campaign.

They tapped on every team at Radius to put together a detailed and helpful report on the importance of B2B data and how to use it well. The taem wrote the first draft, developed it with internal stakeholders, and worked with their in-house design team to create the final template for the report.

The report was delivered to the decision maker at the target account along with a gift basket featuring a locked bottle of wine or Bailey’s. Once prospects took a meeting with sales, they received the code to unlock the bottle. 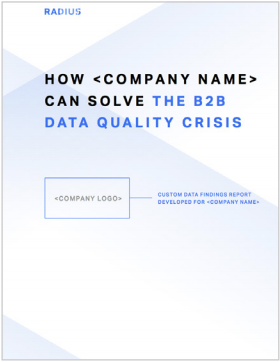 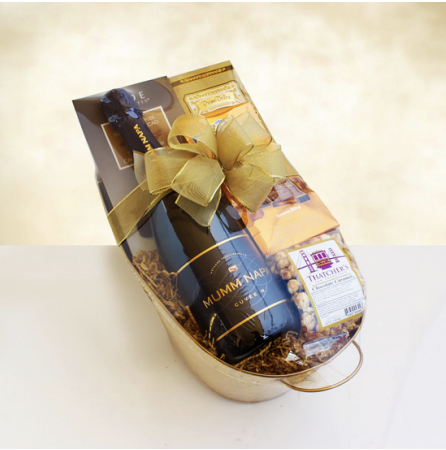 Why It Worked: There were a few keys to the success of this campaign:

Rollworks, a B2B growth platform, was seeking to scale. They needed to get more SDR’s in the door, more effectively push stalled deals, better nurture accounts post-meeting, and do a better job of onboarding new clients.

They rolled out an accounts based marketing campaign to do all four. It resulted in a 3x increase in appointment rate and a 15% increase in close rate.

Here’s What They Did:

They rolled out an email campaign that lead to personalized landing pages to get the conversation started. To help this phase, Rollworks ran “air cover” ads to warm up the prospect along with personalized retargeting ads to remind those who clicked to take their next step. 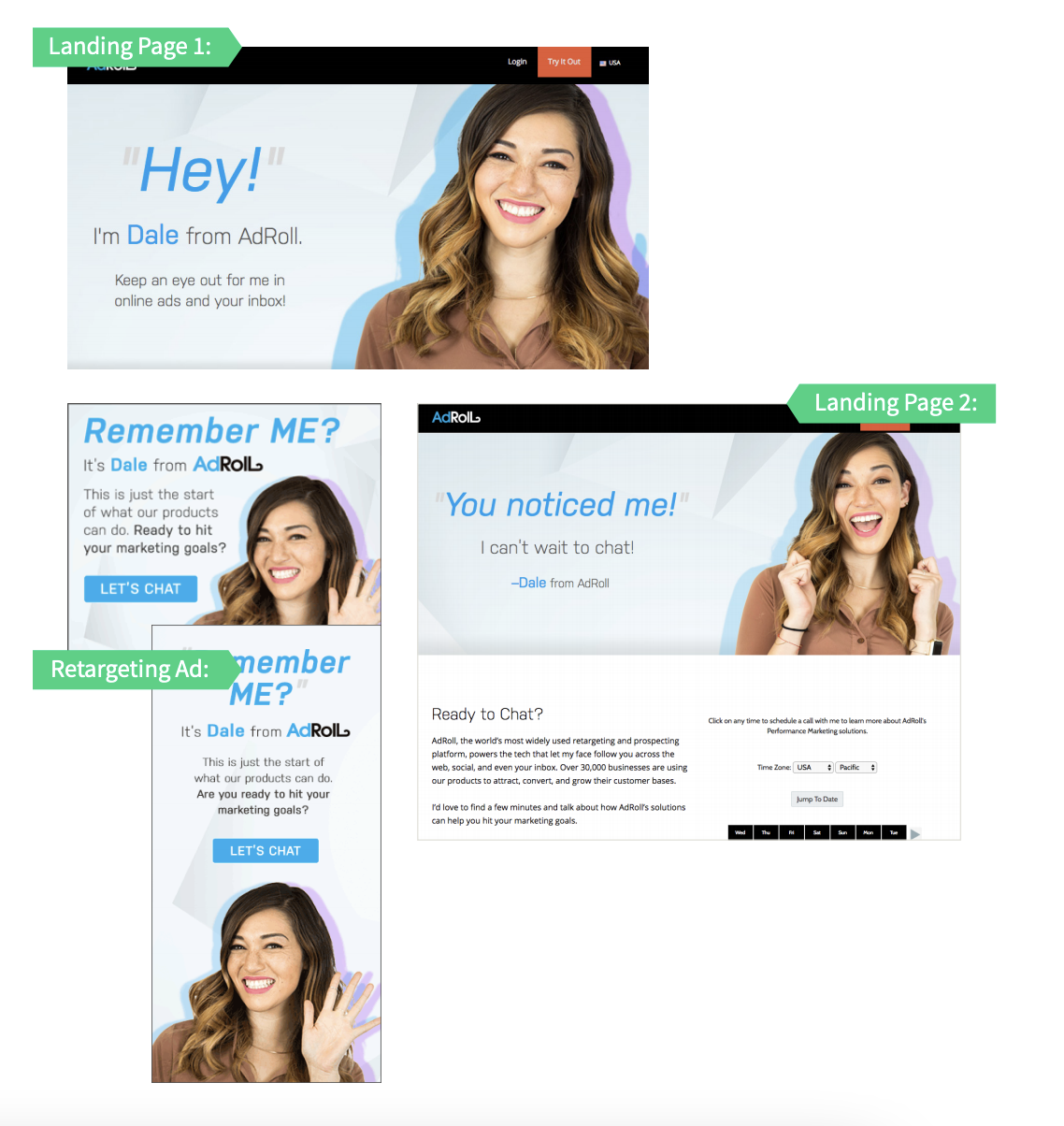 Things didn’t stop once a meeting had been held. The Rollworks team wanted to push these prospects along their sales pipeline and prevent stalled deals. So they sent a direct mailer within days of the meeting. 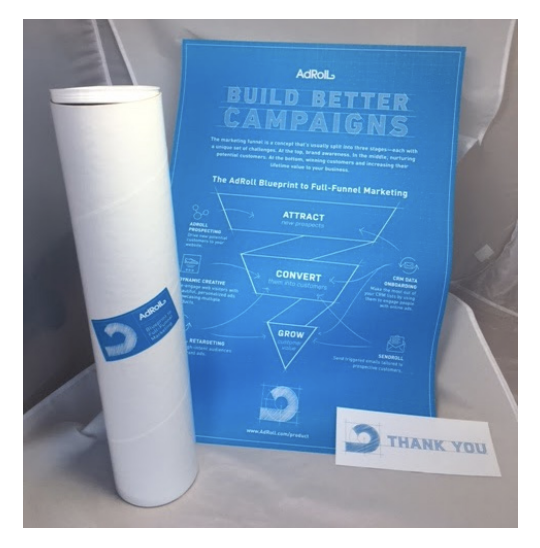 If a prospect had not progressed after 35 days, they sent a final push in the form of an “Over-the-Line Kit.” This branded kit included a notebook with a checklist that outlined the final steps they needed to take to get their first ad campaign up and running.

Why It Worked: The key to this campaign was its thoroughness. The Rollworks team left no stone unturned, and didn’t assume a prospect was in the clear just because they had a decent sales meeting. They got the attention of prospects, nurtured them, and then helped them to the finish line through creative and personalised ABM plays.

Saleswhale, a lead conversion software, opted to run an ABM campaign to drive revenue back in 2019. Their focus on segmentation helped them close $210,000 in revenue from a $2400 campaign investment.

Here’s How They Did It:

They began by analyzing historical sales data to determine what types of accounts had performed best over the years. The Saleswhale team teased out similarities between our best performing accounts, and clustered them.

Next, they segmented their chosen prospects into four groups:

Then, they rolled out ads on LinkedIn, only showing to their target accounts (with unique content based on the role of the prospect). 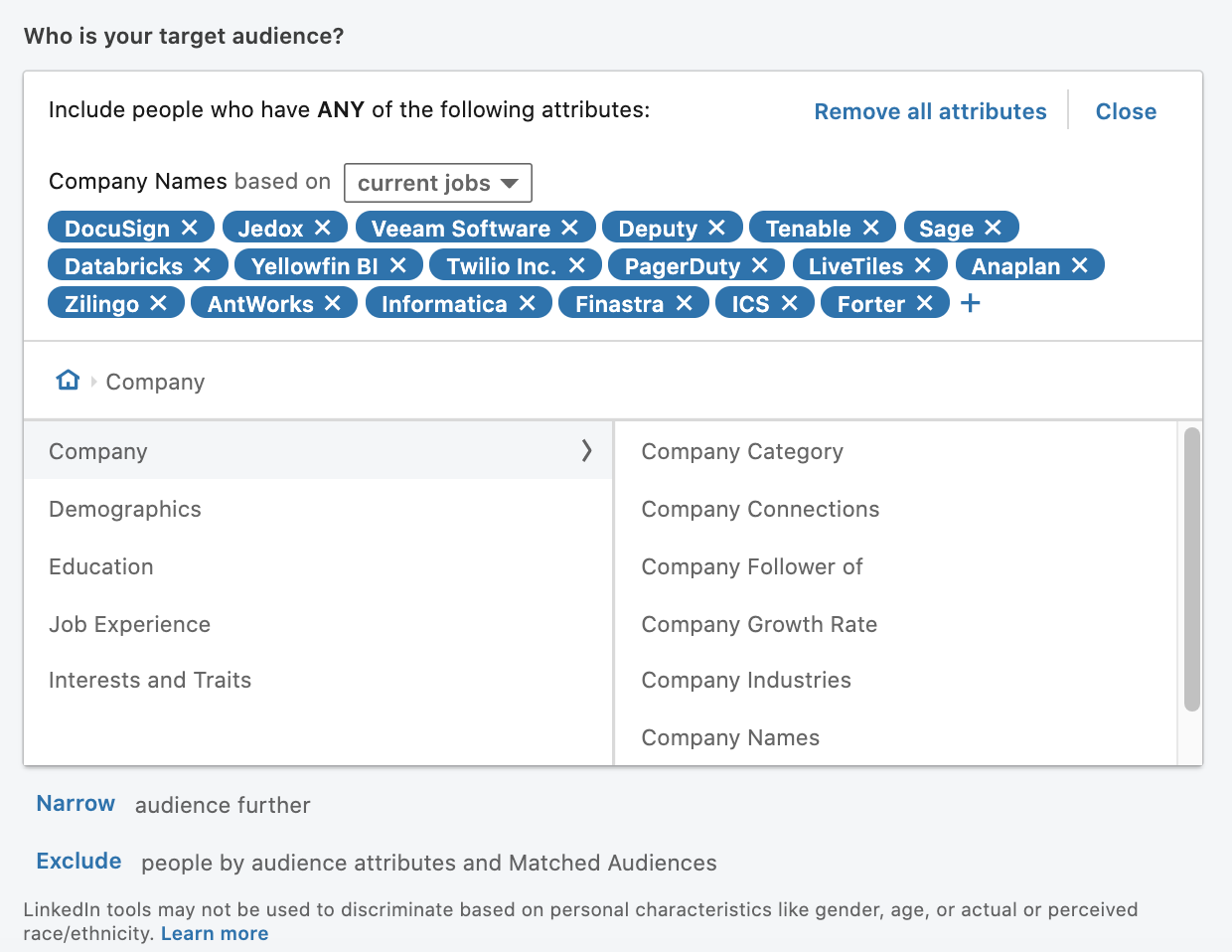 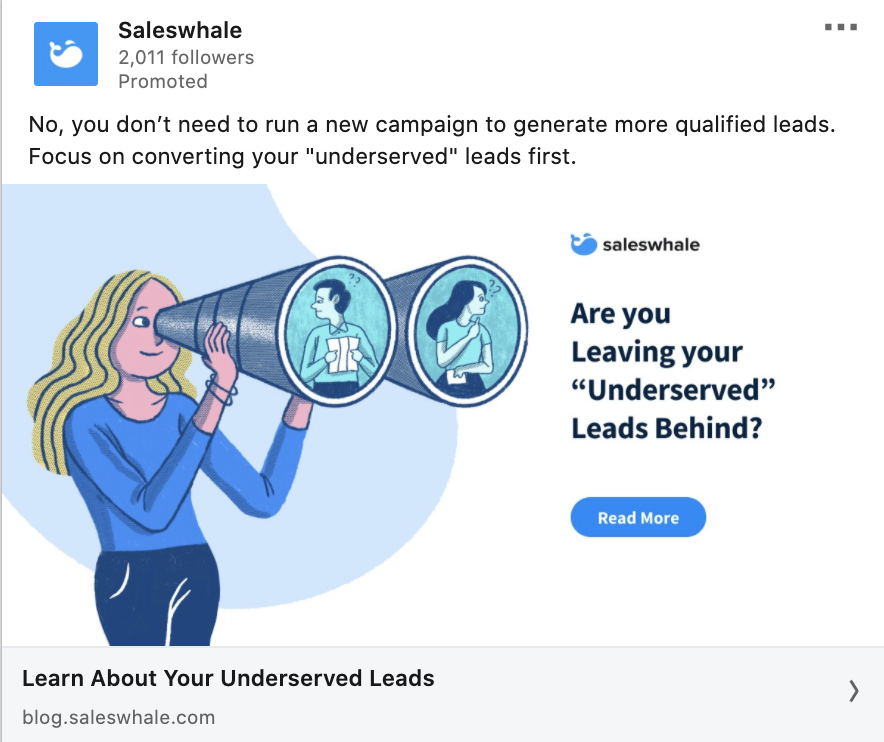 Their ads led to a landing page featuring an eBook download on the “Best Kept Secrets of Demand Generation Marketers.”

They then used an AI assistant to reach out to engaged accounts (accounts that had multiple employees engaging with content) to speed up the conversation. Those who engaged with the assistant were kicked to sales reps to close the deal.

Why It Worked: The key to this campaign was segmentation. When going after big accounts, there are multiple people at the company you need on board, so why not market to all parties? If multiple employees like what you have to say, your chances of closing increase dramatically.

Now that you’ve gotten some inspiration and insight into what has worked for these seven companies, it’s time to create some magic for yourself.

Do you have an awesome accounts based marketing example you’d like us to add? Let us know!

Get proven actionable insights delivered to your inbox

Learn what the pros do differently. Receive one email per month with actionable marketing ideas

Guaranteed to make you look smarter.
(Cuz you will be.)

Start every week with all the digital marketing stories, data, teardowns, case studies, and weird news you need to drop in your next marketing standup meeting.

No ads. No sponsorships. No crap. Unless it’s hilarious crap. We love that.